In the National Football League, the good teams are good for a reason, and the bad teams usually stay bad.

We’re approaching one of the most exciting times of the NFL offseason each year, as the league’s free agency period will open on March 17. Players who are designated as free agents can now have the ability to sign with any franchise in the league, and those teams with plenty of room to spend money will look to improve their team and make an impact for the following season. However, we see it every year – while some signings will be hits for teams, there will be plenty of misses by clubs around the league.

From Reddit user /u/fortune_auto, this visual based on the 2020 NFL season shows how much each team paid the salaries of players who weren’t even on their team. This is what’s known as dead salary-cap money, which is money being paid to a player who was traded or released before his contract expired. The visual itself is simple and the point, as it needs to be with ranking them, and showing that the teams who struggled with the cap likely didn’t make the postseason. 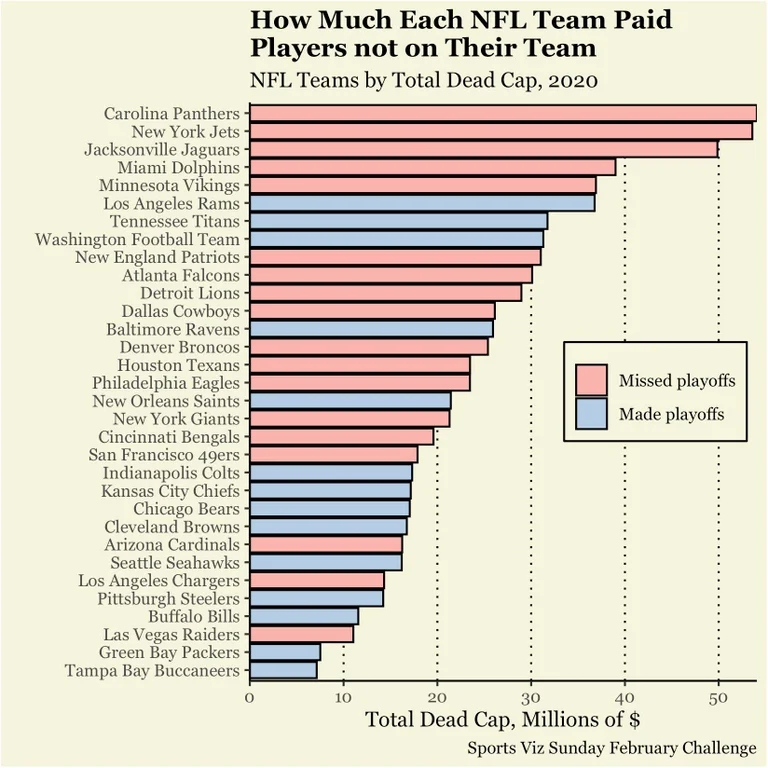 The five teams that paid the most money to players no longer on their team were the Carolina Panthers, New York Jets, Jacksonville Jaguars, Miami Dolphins, and Minnesota Vikings. None of these teams made the postseason in 2020. In fact, of the 20 teams in the league who paid the money in dead cap space, only five (25%) made the postseason. Of the twelve franchises that spent the least in this area, eight of them (66.66%) made it to the playoffs.

These are the five largest dead-cap hits in the history of the National Football League, according to CBS Sports.

How Americans of Each Generation Spend Their Money

The Shark Attack Capitals of the United States