The Data Is Beautiful Subreddit has long been a favorite stomping ground of the staff here at The Chartistry. In fact, it was beautiful data visualizations that I was introduced to there that first ignited my love for charts. As you might have guessed, today’s visualization comes from this very place. Unlike most visualizations we feature here, this one proves that a good visualization doesn’t need to be beautiful; sometimes they just need to be functional.

Reddit user Gullyn1 has created a simple map that reveals the United States by the length of their Wikipedia articles. You can find the original Reddit post here. Gullyn1 explains in a comment that they used Wikipedia’s API and Python to create the map. 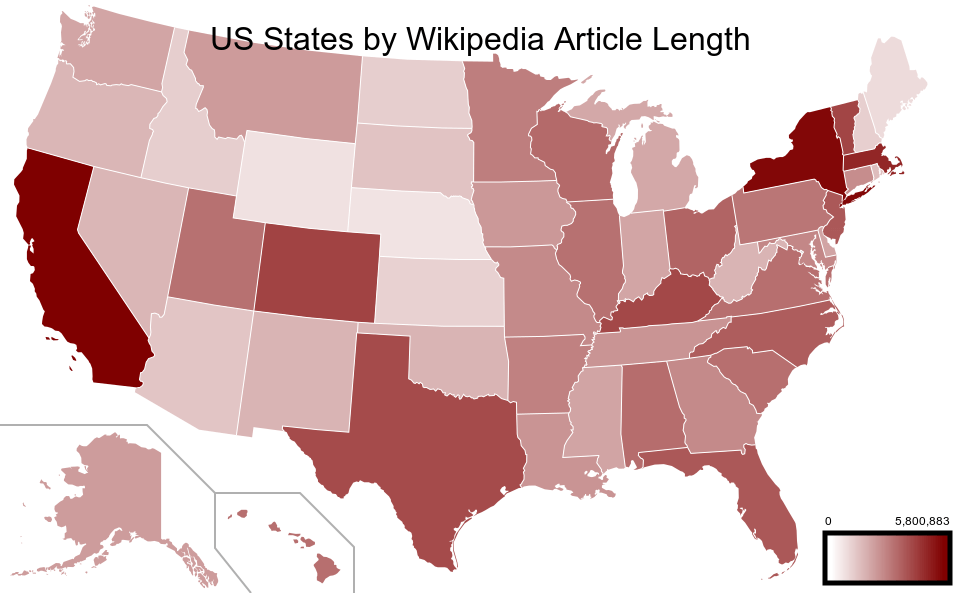 At a glance, it appears that New York and California are the clear front runners. It’s unclear why some articles are longer than others but if I had to guess, I’d wager that it’s the states with the most history and those that have had the most notable events (both positive and negative). According to the raw data, California is the longest at 5,810,441 bytes for its main and sub-articles and New York comes in as a close second place with 5,655,709 bytes.

“This is great and all, but isn’t this map just showing a trend that the states with the highest populations also have the longest Wikipedia articles?” You might be right! That’s why I was especially happy to see that Gullyn1 created an additional map that adjusts for population. See it here: 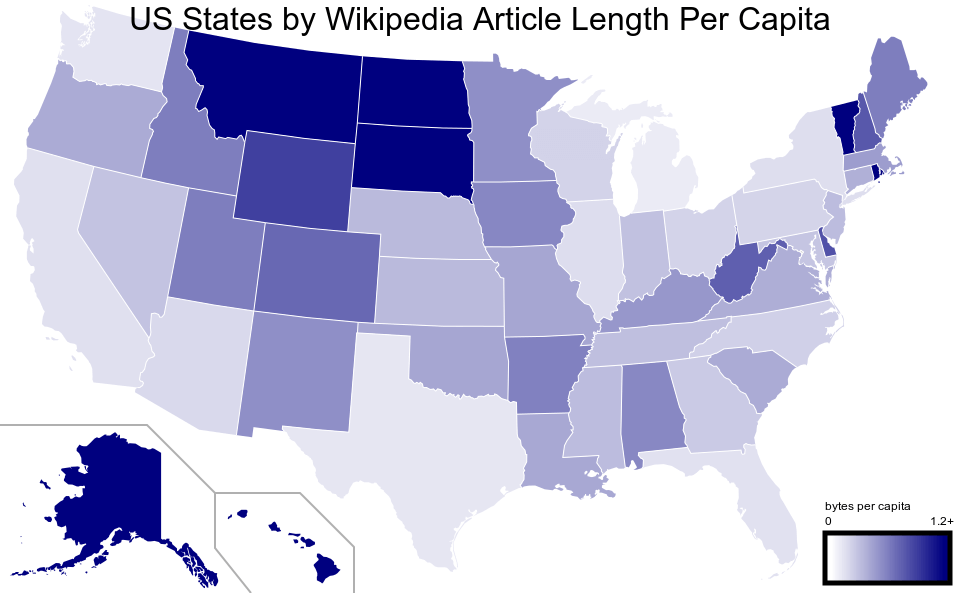 When you look at the data like this, interesting and more meaningful trends begin to emerge. After adjusting for population, Montana, North and South Dakota, Vermont, Rhode Island, Alaska, and Hawaii are the new front runners.

Where Are the Most Bike-Friendly Cities in America?

Where Are the Largest Racial Disparities in Marijuana Possession Arrests in America?

Which Cities Truly Never Sleep? This Chart Shows the Cities With the Most Night Workers

The world never truly sleeps – humans are working hard around the clock trying to make a living, provide for their families, afford their hobbies, or just make it to the next meal. While many of us are blissfully sinking into our pillows, night shift workers are just beginning their “day” of work. A typical night shift, or third shift, involves working from 11:00 PM to 7:00 AM or 5 PM to 2 AM. So where are these night workers most abundant? NapLab has created a chart exploring the U.S. cities with the most people working night jobs. Before you scroll down, take a guess at the top city. I did my first time discovering it – I’ll share my answer below!

My initial guess was Detroit, Michigan. I have never been, but something about it just oozes “burning the midnight oil”. What was your guess? Comment below! In reality, the top city with the most night workers is Las Vegas, Nevada, which actually makes absolute sense considering its reputation for a dazzling, chaotic and never-ending nightlife. 16.53% of Vegas’ workforce works the night shift! After all, you would never expect a city with the monikers “Sin City”, “Neon Capital of the World”, “Entertainment Capital of the World” and “City of Light” to become a quiet little hamlet once the sun sets. I felt a little better when I discovered that my guess, Detroit, ranks 28th with 11.93% of the workforce manning the night shift.

Overall, I appreciate the overall feel of the chart – the colors convey the topic exceptionally, and the header is lovely and eye-catching. I have never seen this data visualized before, so I appreciate the opportunity to learn something new about the culture and economy of America.

U.S. Cities Where Home Prices Have Increased the Most Since the Pandemic

The COVID-19 pandemic has impacted prices and expenses across the board. From groceries to living costs, most people are feeling a hit to their wallets. Housing costs in particular have been rising exponentially. Where in the United States have they been rising the most?

The following visualization shows where in the U.S. home prices have increased the most since the pandemic. The graphic utilizes a pin map at the top to indicate where each of the cities are located, and then uses a column range chart to depict the change in home prices between January 2020 and July 2022.

These are the cities that have seen the biggest increase in home prices since the beginning of the pandemic in 2020:

Unsurprisingly, since many employees are now allowed to work from home, warmer locations have become popular places for relocation. This could play a part in why home prices are increasing in states like Florida and Arizona.

On the flip side, these are the cities where home prices have risen the least since the pandemic:

Odessa, TX is the only place where home prices have decreased. Major cities like San Francisco, New York City, and Boston have also experienced low levels of home price increases, likely due to many people leaving large cities during the pandemic.

Which city on the list is most surprising to you?