With the ongoing war between Ukraine and Russia, many people have begun to wonder, and worry, if nuclear weapons will eventually come into play. As of 2022, Russia has around 6,000 nuclear warheads which is nearly half of the nuclear weapons in the entire world. Of their stockpile 1,500 are retired and going to be dismantled, but the 4,500 nuclear warheads that remain include ballistic missiles and rockets, which are considered to be strategic nuclear weapons. What would happen if Russia, or another country, decided to shoot nuclear missiles at the U.S., and how much of the country would be affected by the fallout?

We came across this map on Reddit that shows the effects a full-scale nuclear exchange would have across the country if the United States was targeted in a nuclear war. The map was created based on data from FEMA and includes three different types of targets for nuclear weapons: civilian, military, and infrastructure. Each target on the map includes a range around it to show how far the effects a nuclear explosion in that area would reach. The effects of the nuclear weapons lessen as the range moves farther from the target, with less time in a shelter required to survive the nuclear fallout. Those closest to the target would be in the severe fallout zone and would need to live in a shelter for more than 3 weeks to survive. The medium fallout zone requires 1-3 weeks in a shelter, minor fallout zone would require 2-7 days in a shelter, and the minimal fallout zone is far from from the target would not require shelter to survive. 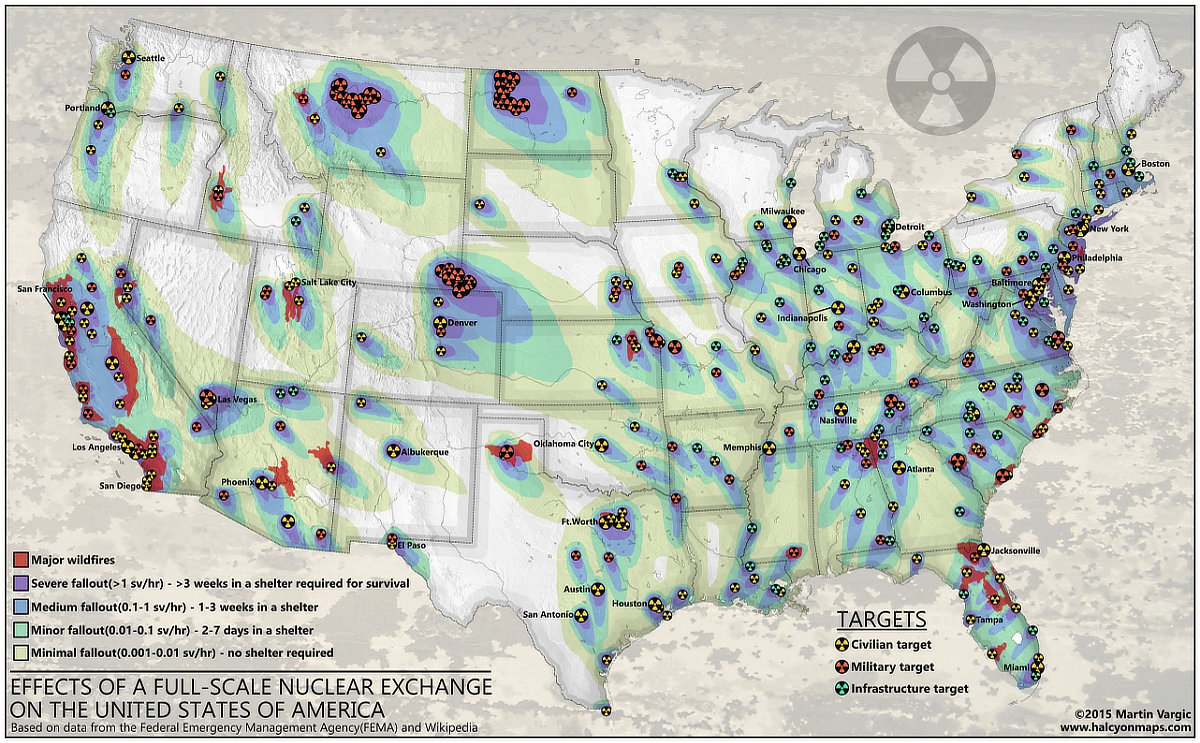 Where the Most People Work from Home Due to the Pandemic

How Does Every U.S. State Compare in Their Recess Policies?

The Biggest Company in Every Country Around the World

Have you ever wondered how many people have an iPhone? There are over 1.2 billion iPhone users in the world! Here are a few other mind-blowing Apple statistics; according to Counterpoint Research, Apple has around a 16% market share of the global smartphone industry and a 50% market share of the US smartphone industry. These impressive statistics make sense when you consider how Apple is the biggest company in the world by market value! We love this new fascinating chart (you can find the full list if you follow that link) of the biggest companies in every country. 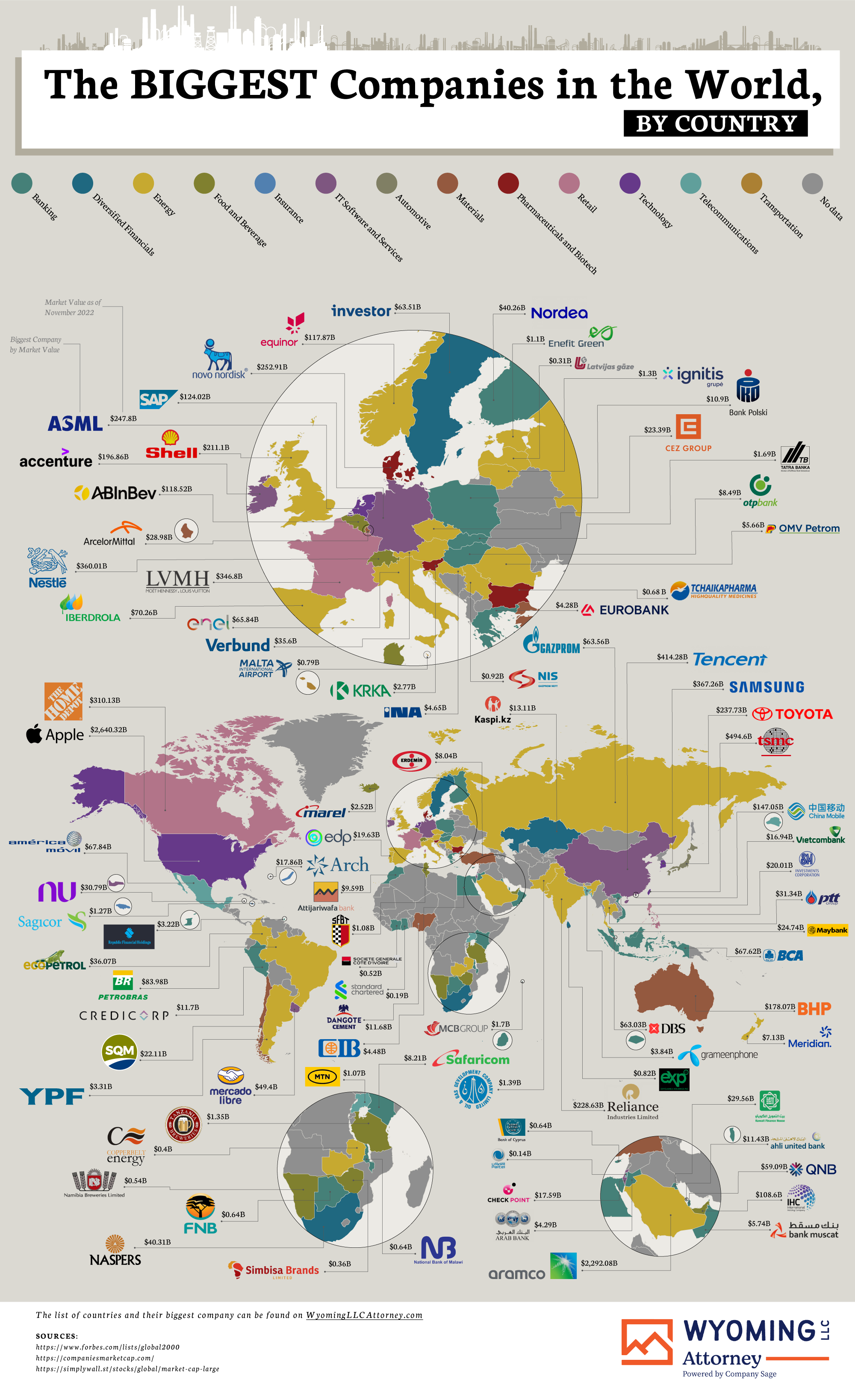 From a design perspective, I appreciate just how much information is packed on here in a structured, digestible way. The color coding provides quick insights into the leading industry in every country. The page provides additional knowledge on the world’s leading companies. Not only does Apple have the greatest market value in the world at $2.64 trillion, it is also the largest tech company by revenue. They are the second largest phone manufacturer after Samsung, which is South Korea’s largest company with a market value of $367.3 billion. A gander through the master list of most valuable companies on the page shows that many are in the banking industry, followed closely by the energy industry. Out of the 90 companies explored, 24 are banks and 23 are in the energy sector. Technology also excels; the biggest company in Asia is the Taiwan Semiconductor Manufacturing Co. with a market value of $494.6 billion. Founded in 1987, it was the first dedicated semiconductor foundry and has been leading the pack ever since.

Maps Show What Matters Most To People Around the World

What matters most to you? What do you find most fulfilling? What would a happy life look like to you? While the answers to these questions are profoundly influenced by your own personal experiences and background, your homeland may play a role too. This simple and beautiful chart by MoveHub.com explores what matters most in every country based on the Organisation for Economic Co-operation and Development Better Life Index.

I find this visualization absolutely captivating and genius; the key made from a wave of colors unites grace and functionality, and the maps are easy to comprehend. You can spot outliers with ease – for example, Georgia, Papua New Guinea, and Slovenia are among the only countries that value environment the most. Community is another rare top value with only Bhutan and Zimbabwe at a quick scan. What about jobs? We spend most of our time at work, so you would think jobs would have a bigger fan base, but I have only found Moldova! Many Scandinavian countries value life satisfaction the most – they may be onto something, because they are also among the happiest countries in the world!

Overall, it is both soothing and thought-provoking in its simplicity. I love charts like these because it makes me reflect both inward and outward – the world truly is a mosaic of cultures with diverse values, priorities, and “recipes” for happiness! Be sure to explore the Better Life Index – it is fascinating! It delves deeper into the data behind the responses and offers more insight into each country. For example, the top five for the United States are life satisfaction, health, education, work-life balance, and environment.