The COVID-19 pandemic changed everything, and working from home proved to be something that many workers preferred! From the team at Financial Force comes this study that analyzes what areas across the United States saw the most people working from home during the COVID-19 pandemic. The study included data from the 2016-2020 American Community Survey, which is conducted by the U.S. Census Bureau on an annual basis.

What Companies Does Berkshire Hathaway Own?

Every NBA Team’s Winning Percentage Since 2000

For nearly a decade, the Golden State Warriors have dominated the NBA. Since the 2015 season, the Warriors have appeared in the NBA Finals on six different occasions, and have won the League Championship four times. However, despite the franchise’s massive success over the last handful of years, the Warriors had several below average seasons.

Due to those abysmal seasons before their great success, the franchise has an overall winning percentage of below 50% dating back just over twenty years. This visualization shows which NBA teams and the highest and lowest winning percentages in the National Basketball Association since the 1999-2000 season. 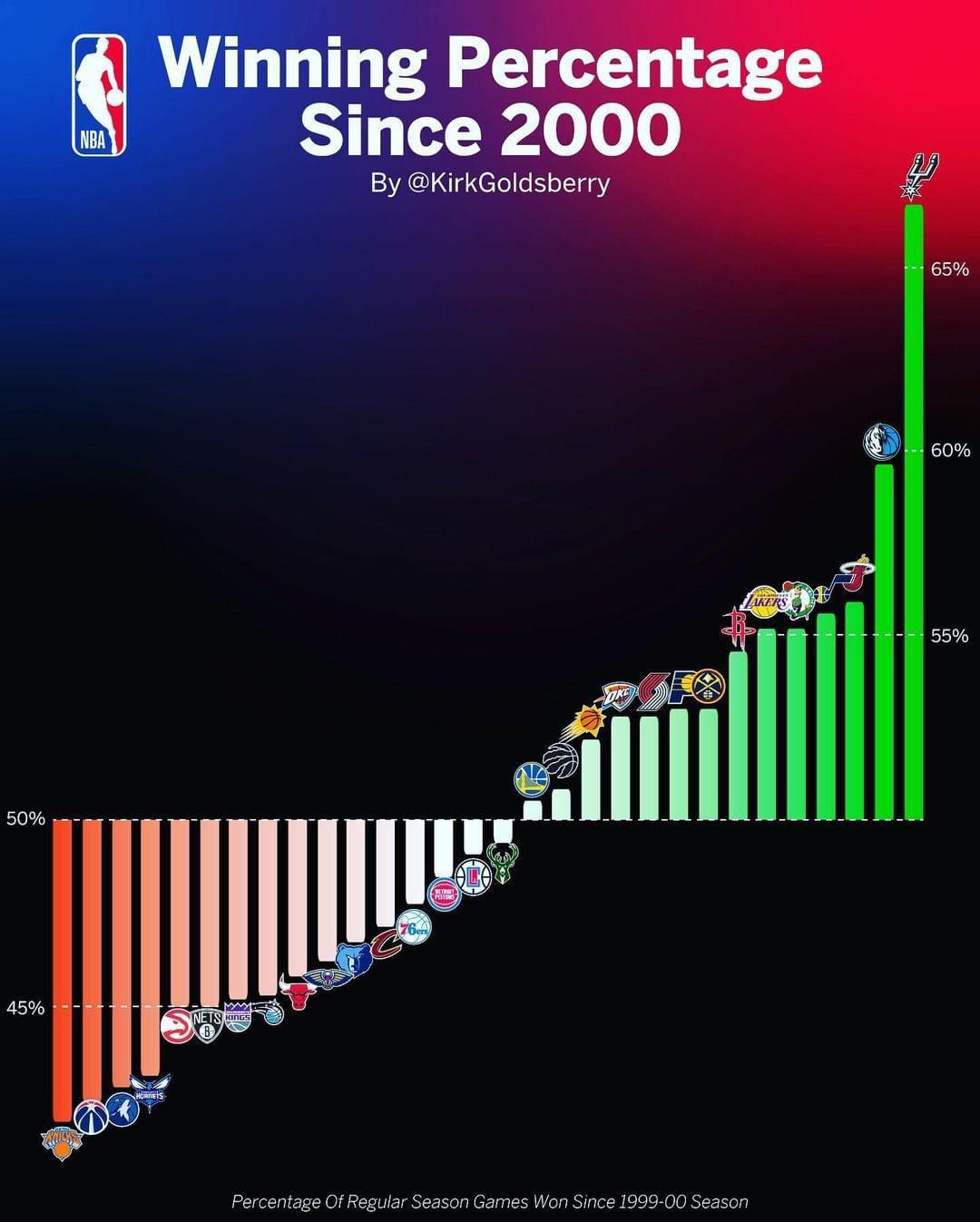 Which NBA team has won the most games since 2000?

Since the 1999-2000 NBA season, the San Antonio Spurs have won the more regular season games than any other franchise in the National Basketball Association. During this stretch, the San Antonio Spurs have won the NBA Finals on four occasions, and have played in the NBA Finals five different times. The Spurs saw their four NBA Championship wins during this time come against the New Jersey Nets (2002-03 season), Detroit Pistons (2004-05 season), Cleveland Cavaliers (2006-07 season), Miami Heat (2013-14 season).

Per the data on this visualization by NBA Analyst Kirk Goldsberry of ESPN, here’s where various NBA teams fall in terms of their winning percentage since the 1999-2000 season through now. While exact winning percentages aren’t listed for each of these NBA franchises, they do fall into different brackets.

What subject did you excel at during high school? What subject was the bane of your existence? For me, math was my arch nemesis and English was my best friend! I was fortunate to go to a high school with a solid reputation, mostly due to my parents doing research on the school district’s quality of education when choosing a place to live. So how is the quality of a high school measured? Of course, there are countless factors that go into how good a school is that can be impossible to quantify. One concrete way to measure the quality of a school are test scores. The team at U.S. Career Institute explored math and reading proficiency scores across the nation to determine the best high school in every state. Check it out:

These math proficiency scores make me feel extra humble about my struggles with math! However, the best school in West Virginia has a math score of 48%, so I don’t feel so bad. All kidding aside, standardized testing does not provide a complete picture of what a school has to offer; it ignores the developmental and experiential differences a student may have, or the school’s focus on creativity and self-expression. Taking tests can be an overwhelming experience for some, and it may not accurately reflect their knowledge and potential for success. Regardless, test scores are still a valuable tool for gauging the caliber of education a student might receive through attendance.

From a design perspective, I love the choice of colors, they are ideal for an education-focused visualization without being cliché or overdone. The graphs are a compelling way to convey the data, making it easy to compare the math and reading proficiency scores of each state. I do wish there were photos of each school, but I appreciate the minimalist approach that focuses on the numbers efficiently.

Each year, Fortune Magazine recognizes the 500 largest companies across the United States, with the ranking being determined by the annual revenue earned by each of those companies. This list includes both private companies and companies that are publicly traded. Leading these companies are CEOs that are not only worth millions of dollars, but have seen much success throughout their careers.

From the team at Academic Influence comes this fascinating visualization that looks at which colleges and universities that have the most alumni as CEOs of Fortune 500 companies.

Which universities have the most alumni now working as CEOs?

According to the research by the team at Academic Influence, it was found that these were colleges and universities that had at least ten alumni who were now the CEOs of Fortune 500 companies.

Founded in 1936, Harvard University is one of the most prestigious universities in the entire world. Due to the university’s illustrious history, it’s no surprise that they take claim to having the most alumni who are now in prominent positions as CEOs. Per the research from Academic Influence, it was found that of the 41 alumni who are now serving as CEOs of Fortune 500 companies, 35 of them had completed graduate programs at Harvard University. Some of the more notable companies that includes this alumni as CEOs today include Amazon (Andy Jassy), JPMorgan Chase (Jamie Dimon), Citigroup (Jane Fraser), Prudential Financial (Charles F. Lowrey), McDonald’s (Chris Kempczinski), Mastercard (Michael Miebach) and Kellogg (Steve Cahillane).

Per their research, here were the nine most common undergraduate degrees of Fortune 500 CEOs.